In Australian society, playing video and computer games and hanging out on the internet has turned into a staple past time that isn’t limited to the “geeks” and “nerds” portrayed in the media. The ease of access, the variety of games available, and the mechanics of these games are common ingredients in what we come to know as “Internet Gaming Disorder”. When combined with symptoms of stress, social anxiety, relationship issues, depression and/or addictive personality traits, it is a powerful recipe for an often misunderstood issue.

What is “Internet Gaming Disorder”?

In a nutshell, the primary issues are people who play compulsively, to the exclusion of other interests, and their persistent and recurrent online activity results in clinically significant impairment or distress. People with this condition endanger their academic or job functioning because of the amount of time they spend playing. They experience symptoms of withdrawal when kept from gaming.

Or to put it simply: 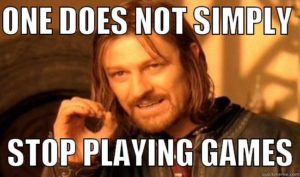 Have a look below and see if some of these points seem oddly familiar:

You started gaming some time in high school. The latest console, PC game, or mobile game had just come out- Call of Duty, World of Warcraft, Counterstrike, DotA 2, Clash of Clans etc.

Gaming made you feel confident about yourself.

Initially, in the short term, your life had meaning! You were a gamer, fit in somewhere online and felt you were important, and needed.
You started skipping class. Maybe you even drop out of school all together. School sucked anyways!
Nobody thinks they’ll become a high school dropout, living in their parents basement playing video games 16 hours a day.
But that’s exactly what happens.

You’re playing more and more and life is beginning to spiral out of control. You notice your friends are getting ahead in life. They’re going off to college. They’re having fun. They’re dating and making lots of friends.

Meanwhile, you’re falling behind. You’ve wasted another year. You know you have so much more potential if you only had the motivation.

Things would be different if you quit…

But that’s scary. Gaming took up a huge chunk of your daily life, what would you do instead? If you quit you’d just be bored and lonely. You don’t want to lose all of your friends.

One day you decide enough is enough. You can’t continue to live your life this way.

How can Living Life Psychology help me?

Having played many video games in the past myself, I can appreciate how much fun they are. Whether it’s building something cool in Minecraft, being “Godlike” in DotA, having the best K/D in CoD and CS, healing Genji in Overwatch; it’s an exhilarating and powerful feeling when you’re good at something and are rewarded by in game designs or social reinforcement. I mean, who hasn’t gotten a warm fuzzy feeling when you finally pull off the strategy or move that you’ve been practicing or friends complimenting you on your e-chievements. I get it.

The thing is, the time you spend playing video games often comes at a price. For some, that is not attending school or paying attention in class because you stayed up to 3am playing games or watching streams. For others, it’s missing out on hanging out with friends (what are those?) and family.

In our sessions together, we’ll work together alongside to explore the games, the social media, and other issues that you are facing. We’d work together to see how we can still enjoy our video games and phones whilst growing awareness in our use of it and the impacts it has on your life. Should you accept this quest, I’d be your companion as we face the mini bosses of stress, social anxiety, difficult friends/parents, and low self esteem. I’ll stay until you’ve leveled up to a place, and have the necessary weapons and feel comfortable tackling these and are ready to head on your own path towards other bosses in your life, whatever that might be.

Studies show that the overwhelming majority of video game addicts are males under 30. The common issues linked with this disorder are young people with poor self-esteem and social problems. They’re usually intelligent and imaginative but often display difficulty in social areas or relationships, with family history of addiction also a contributing factor.

According to the Diagnostic and Statistical Manual (DSM-5),  Internet Gaming Disorder is a “Condition for Further Study”.  This means that it is not an “official” disorder in the DSM, but one on which the American Psychiatric Association request additional research.

Studies suggest that when these individuals are engrossed in Internet games, certain pathways in their brains are triggered in the same direct and intense way that a drug addict’s brain is affected by a particular substance. The gaming prompts a neurological response that influences feelings of pleasure and reward, and the result, in the extreme, is manifested as addictive behavior. In fact, most video and phone games contain positive reinforcement artifacts developed to encourage further use of the game.

If you’re concerned your child may be addicted to video games, don’t dismiss it as a phase. Keep good documents of the child’s gaming behavior, including:

Don’t delay seeking professional help; if there is a problem, it will probably only get worse by avoiding it. 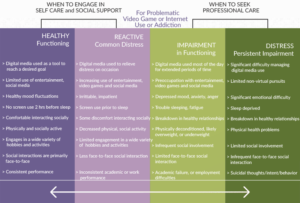 What do clients say about psychological therapy?

“It’s not the games and internet that made me addicted, it was the need to escape reality”

Click to make a booking or send an enquiry

Bookings by appointment only